Sierra Nevada 2
In the previous evening, when I drove up to the Hoya del Portillo carpark N36.96849 W3.33316 (2146m), I had been disappointed to find that the road barrier had a young man acting as a vigilare. I was certain he would tell me that overnight sleeping in the carpark was not allowed. However, he had no problem with this idea and even gave advice on where I find the maximum shade from the sun the next day. This meant I could make an early start and not waste an hour or so driving from somewhere down below. 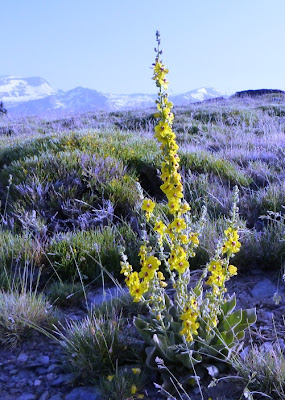 From the carpark there are no signs pointing to Mulhacen, although there are several others – the main one being to the Refugio del Poqueira (RP) which is in the right direction so seemed the obvious one to follow. The path heads up through a pine wood and then comes out of the trees on to a broad ridge. Shortly afterwards there is a fingerpost at N36.97767 W3.33071 (2336m) which offers the options left to RP and straight on for the Mirador Puerto Molin. I took the left track which drops slightly into more pine trees and then does a long traverse of the ridge. It crossed a stream/arroyo at N37.00574 W3.31251 (2559m) - a good place to refill water bottles, take purification tablets.

I left the RP track which forked left at N37.01272 W3.31057 (2602m) and then crossed the road to RP at N37.01786 W3.30959 (2636). Up the slope, above me, I could see a large group of about 15 people who presumably had started from the refugio. I made my own way up the slope to reach the upper road at N37.02119 W3.30591 (2762m). I followed the road past a rocky rib that runs east-west over the main ridge – there was a place where rockfalls had blocked the road almost completely. Just past the rocky rib there was easy pathless ground and I headed up to what looked like a collado at N37.03074 W3.30404 (2969m) and then I turned left on to the regular path that rises up the south ridge of Mulhacen II from Mirador de Trevelez. This path is not shown on the Editorial Alpina 1:40000 map.
It eventually climbs up through jumbled rocks and stony ground as the air pressure drops to the trigpoint on Mulhacen II at N37.04424 W3.31207 (3362m) and then continues in a similar vein to the main summit Mulhacen (3479m) P3285, an Ultra, the highest and most prominent point in Andalucia, the highest and most prominent point in mainland Spain, the highest and most prominent point in the Iberian peninsula.

It has a trigpoint and a small shrine that is littered with religious rubbish – why is it considered OK to leave a pile of red used plastic candle jars but not, say, beer cans? However it also has tremendous views across to the Pico de Veleta which, from the south, steals the exhilarating drama – although the view downwards and northwards is quite dramatic on Mulhacen too. (Must remember to try and get to look at it from the north somehow).
It was windy enough up there that despite the season it was necessary to put on a fleece hat. There was a young Spaniard at the top and after we did the usual camera swap thing he left me to enjoy the summit on my own. As it was quite early in the day I sat and read a few chapters of Iain Bank’s strange novel, The bridge before I set off back. As I reached the top of Mulhacen II I met coming up the group of 15 I had seen earlier above me and had avoided getting embroiled with by cutting the corner. They were mainly English – with those horrible estuarial accents you get from people who live in the south-east of England. Then there were several more parties – presumably from the Caprileira - Mirador de Trevelez bus. On the descent I sort of kept high up above the regular path until I came to the rib of rocks that I had crossed much lower down. This meant I dropped down to the collado where I had earlier joined the regular path and then I followed that path to the spaghetti junction of tracks at N37.01317 W3.30360 (2715m) near Mirador de Trevelez. I followed the road south that traverses Alto del Chorri to N36.99658 W3.31215 where a minor path, not marked on the map, heads up on to the ridge where there is yet another trigpoint at Prado Llano N36.98735 W3.32049 (2582m). 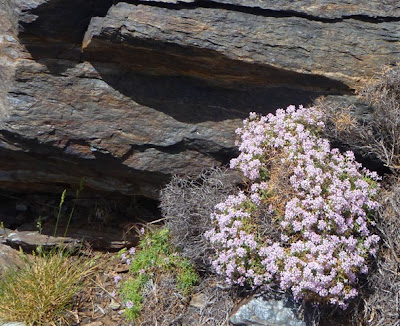 The path heads down again to Mirador Puerto Molin and then carries on past the fingerpost and to the Hoya del Portillo carpark where there were quite a few people heading off, presumably for the RP. 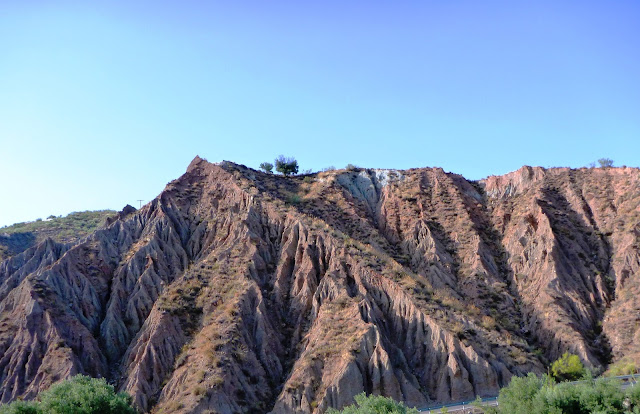